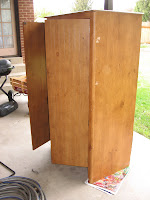 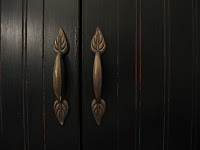 A television cabinet with doors recently became a need in our house when Liam started to pull all the DVDs out of their cases and stuff them into the CD player. I checked online for a simple bookcase with doors and WOW even the cheaply made Walmart stuff was expensive! Well, out of my price range anyway. So, I moved all the DVDs on top of the mantle and sighed; I hate clutter.

Then, a week later as I was helping a friend move, she mentioned that she was leaving an armoir behind. It had gotten a little rickety and was showing signs of wear. I begged her to let me have it. A brace from scrap wood and a can of paint later and ta-dum a tithing blessing appeared! Okay, so I did have to prime it with a high adhesion primer first, but that was lying around from an old project. I also high-lighted the groves using left-over rust colored paint my sister-in-law used in her front room. Total Cost: $8

Aubrey said…
I love it Tabi! It looks so awesome! I can't wait to see your house again in June! I'm sure a lot has changed! As soon as I finish my bedspread and pillows, I'm going to try and do some dresser painting of my own. You have to let me know what paint/primer to use and how to get an 'older' look by highlighting. You are so talented!!!
May 27, 2008 at 1:43 PM