My mom used to make these for us when I was a kid. We didn't have them very often, so they were and still are really special. Imagine...a cookie you could draw on with normal non-toxic markers. How cool is that?

I thought Liam would get a kick out of them too so we tried them out ourselves. Here are a few results: 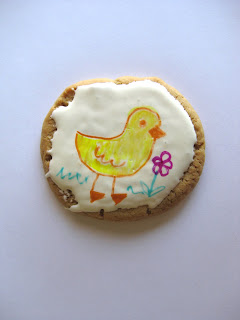 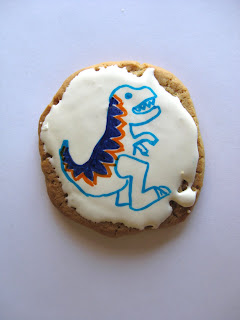 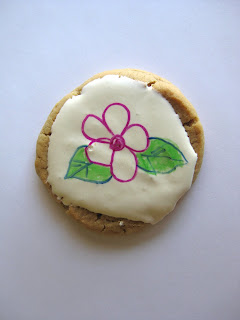 (I had to practice a little on the T-rex. Having a boy has opened up a whole new world for this girly-girl.) 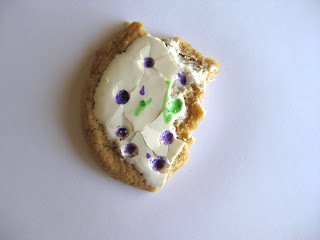 Here's a typical Liam creation - in its typical half-devoured state. He drew on a few, but then decided that stabbing the cookie with the marker was oh so much more fun.

Here's the recipe. (They taste pretty good too. Kind of like a brown sugar cookie or a chocolate chipless cookie. But if that's not your idea of yummy, you could used the icing on any other flat cookie instead.)

Cream together shortening, brown sugar, and eggs. Add sour milk. Sift in flour, soda, and salt. Divide dough into two parts. Roll each part into a tube or "worm" slightly shorter than your waxed paper. Wrap/roll each dough "worm" in waxed paper and chill for 1 hour.

Unroll dough from waxed paper and slice into disks about 1/2" thick. Place on ungreased cookie sheet. Bake at 400 degrees for 8 to 10 minutes.

(I let my icing harden overnight. It won't harden like a rock rather it forms a sort of hard outer layer so use a somewhat soft hand while drawing on them with the markers.)
Labels: Baking