Corsage a la "Made" a la "Not Martha" 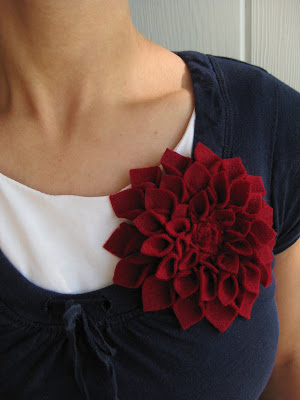 If you follow Made, you've probably already seen this corsage, and if you're like me, you fell in love with it, decided to drop all other half-finished projects, and used this tutorial from Not Martha to make one...or two.

Fabulous tutorial, great pictures. The only thing I did differently was to sew the petals on instead of gluing them. I just don't have fabric glue around. Oh, and I hot-glued an alligator clip to the back instead of a pin so it can be worn in my hair if I want.

It would also look adorable on a birthday crown. 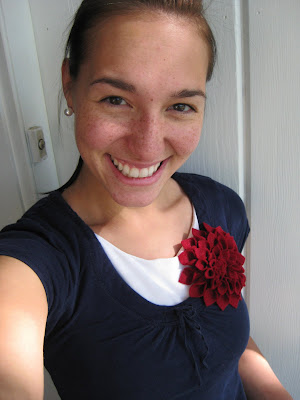 I usually dress up if I know I'll be taking pictures of myself for the blog, but today we're keepin' it real around here. This is how I look most days: hair in a ponytail, t- shirt, sans make-up, and if it's before Teagan's nap, sans shower. Good thing for you, Teagan had already napped. Otherwise, things could get really scary.

For example: One seventh grade morning, a friend asked me if my hair was wet. I said, "No." The truth was it was just greasy. The whole hygiene thing apparently hadn't registered yet. It has now (thank your (and Will's) lucky stars)...just not usually before Teagan's morning nap.

No matter how many episodes of Top Model I've watched, I never fully appreciated how difficult it really was to be the subject matter in a photo until I started taking pictures of myself for this blog. Most pictures end up goofy or awkward, but thankfully now hygienic.
Labels: Free Patterns/Tutorials My Favorite Sites Sewing

Emily said…
How lovely! I love the idea of an alligator clip so your corsage can multitask.

BTW my hair ends up in a ponytail every day, no makeup, and unfortunately no showering until my husband is home to entertain our high maintenance little girl.
October 1, 2010 at 10:07 PM