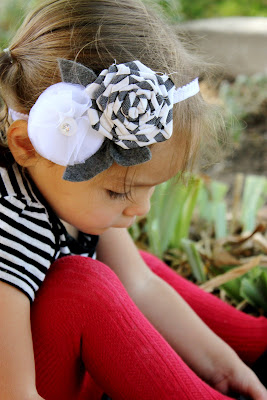 So uh, this isn't a very substantial project, but I wanted to share it anyway. Now that I know I'm having another girl, I've allowed myself to be taken over by the "pink side" and recently made this little girly headband. It's nice knowing that these things will be well-used by both my girls. It makes me feel so much better about spending so much time and resources creating. Not that I was about to stop, but sometimes I wonder if it's really worth it. I mean I wouldn't be me if I couldn't create, but it's nice knowing my efforts will be appreciated twice over.

I loosely followed this tutorial from Sewing in No Man's Land using the scraps I had on hand and a piece of lacy elastic from JoAnn's.  I suspect this elastic is meant for underclothing. At least, that's what it brought to mind, but I won't tell if you don't. 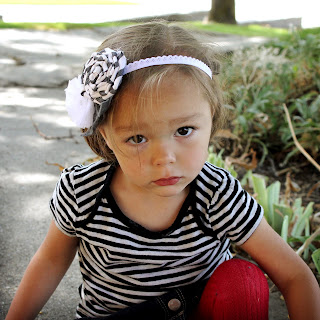 Teagan was not in the mood to have her picture taken just before naptime the other day. Imagine that! I cracked a joke and she looked up and gave me this "Seriously, Mother? Get real!" kind of look. I think there was a little eye roll involved too. Talk about two going on seventeen.
Labels: Free Patterns/Tutorials Sewing

Aubs said…
Oh so cute! I thought about Tigi all day on her birthday! She just gets more beautiful every day. So excited for another girl! Did you pick a name yet? I'm excited for your new camera. :) So fun! p.s. did you know the ads on the side often advertise lots of skin? Like REALLy low neckline stuff? Last trimester, here we come, right? Can't wait!
September 16, 2011 at 11:29 AM

Refugee Crafter said…
Hey Aubs,
All the offensive ad categories on my Adsense account are blocked, but sometimes risque "fashion" ads may sneak through. If you see an offensive ad, please let me know the ad's URL so I can block that specific ad from ever appearing again. At this point all I can do is shoot them down one by one, case by case.

As a side note, I'm wondering if Adsense reads your location because here in "Happy Valley" all I seem to get are fabric and kids clothing ads! Weird.
September 16, 2011 at 9:44 PM